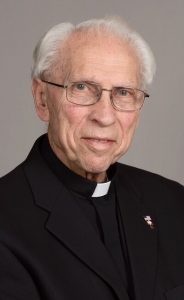 FARACI, Rev. Fr. Francis Joseph. – of Burton, Michigan, age 93, passed away on Monday, June 28, 2021 at Charter Senior Living of Davison. A Mass of Christian Burial will be celebrated 10 AM Tuesday, July 6, 2021 at St. John the Evangelist Catholic Church, 404 N. Dayton St., Davison, MI 48423, Bishop Earl Boyea, celebrant. Burial will be in St. John Catholic Cemetery. Visitation will be 4-7 PM Monday, July 5, 2021 at the church. A Rosary will be prayed 6 PM Monday, immediately followed by a Memorial Service conducted under the auspices of the Davison Knights of Columbus Bishop Albers Council 4090 and the Ardon F. Dubie Fourth Degree Assembly 0523. There will be one hour of visitation prior to the Mass on Tuesday. Memorial Contributions may be made to the Christian Service Commissions of the parishes Father served or the Senior Priest Build at Blessed Sacrament Catholic Church in BurtonFather Francis was born in Detroit, Michigan on June 3, 1928, son of the late Pietro and Maria (Mancuso) Faraci. He was ordained to the Priesthood on September 10, 1959, for the Capuchin Province of Saint Joseph, and Incardinated into Diocese of Lansing on June 3, 1985. Father Francis was a Parochial Vicar at Saint Paul in Owosso, Saint Pius X in Flint, Resurrection in Lansing, Saint Joseph in Adrian, and Saint Pius X in Flint. He was the Pastor of Holy Family in Ovid and Saint Mary in Flint. Father Francis attained Senior Priest Status, and became the Sacramental Minister at Saint Francis Xavier, Otisville in June 2003. He was the Temporary Administrator at Holy Rosary of Flint in 2011.